Academy Award-winning editor Walter Murch is said to explain his role in films quite simply: “You just cut out the bad bits!” But for Matt Levie, a post-production supervisor who got his start in editing over 20 years ago, this description initially felt wrong: “At first I thought he was degrading this incredibly delicate craft,” says Levie. Upon further reflection, though, he muses that “maybe it’s not a bad place to start.”

For the last five years, Levie has had a particular specialty in post-production: cooking shows. “One of the things people don’t know about editing is how much work goes into every single minute they see on television, and how much effort went into that minute to make it quote unquote watchable,” he says. “For every single frame that’s shot, we color correct in order to make it more appealing — to make sure the food is appetizing, the presenters look attractive and healthy, everything is shot well, etcetera. We even up the lighting, smooth out the color, make it look beautiful — and the audience is unaware that it ever happened.”

Post-production is also responsible for determining which angles to use at every moment in the preparation of a recipe — with a fixed set, they’re able to capture multiple angles at once — and for cutting all the footage to fit in the allotted 30 minutes for the show. Levie likens the process to surgery: “you have to make some very hard cuts and sew them up well enough to make it seem like they were never there.”

Cooking up a Cooking Show

Currently Levie is the post-production supervisor of the national PBS series, Secrets of a Chef, produced and directed by Marjorie Poore. 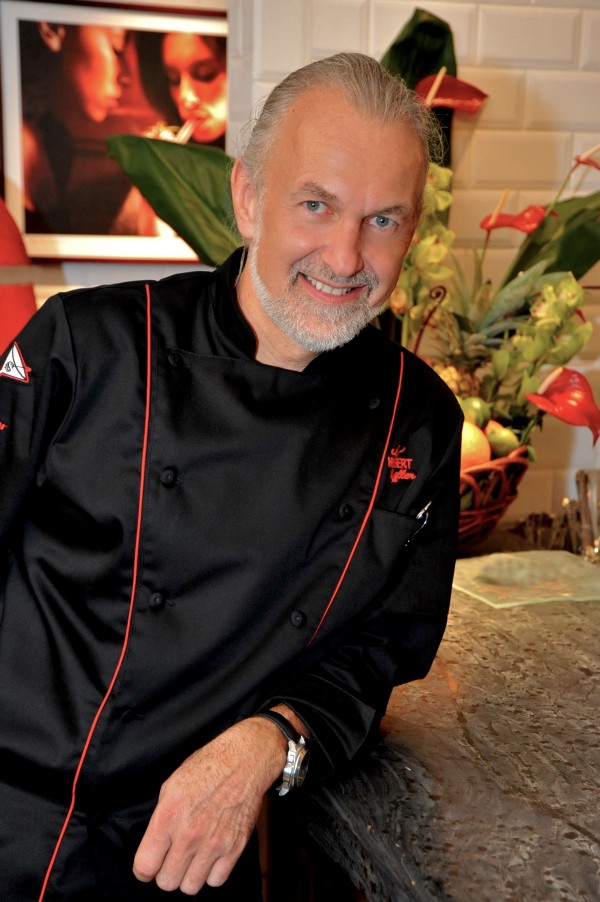 Hubert Keller, star of Secrets of a Chef.

Anchored by the charming Alsatian chef and restauranteur Hubert Keller, the show runs 12 half-hour episodes in a season (it is now entering its fifth season). The post-production process each season is a six to nine month endeavor, and as the supervisor of this undertaking, Levie contributes by both editing the show and overseeing a small phalanx of other editors throughout the process. “Like any technical professional, once you get to a certain point in your craft, you start to become an ideal candidate for managing large projects,” he says.

The process of manually condensing, color-correcting, and otherwise beautifying two to four hours of footage into 30-minute episodes requires careful collaboration between the editors and the show producers, who often have a very specific vision for how a recipe should be presented. Each episode showcases multiple recipes, each consisting of dozens of shots and other details to manage across the teams. Finding the right software to help facilitate this collaboration has historically been a challenge: although they thought they’d use traditional project management software, in the end, “it was too complicated and the learning curve was too high for what we needed.” Coming into this season, Levie feared they’d have to go back to their previous method, which was to use an Excel spreadsheet. “That was a horrific disaster,” he says.

Our producer wanted a lot of information, and it was really hard to cram all that information into a spreadsheet.

“Our producer wanted a lot of information, and it was really hard to cram all that information into a spreadsheet,” says Levie. “So we ended up with a spreadsheet that wouldn’t fit on a screen, and that became annoying, because out of sight, out of mind, so people would forget to update fields because they weren’t on the screen.”

Then he found Airtable.

Transitioning from Spreadsheet to Database

Levie initially just imported an existing spreadsheet (from a previous season) directly into Airtable. “We transferred the spreadsheet over and said, how can we use this to keep more or less the same information, but store it more efficiently?” As it turned out, the first step was actually to split the information from one giant, monolithic table into two. “We have multiple recipes in one show,” explains Levie, “So we needed to keep track of everything going on in the recipes, but we also needed to keep track of the shows. We were trying to keep in one spreadsheet, but it’s way better in two.” In the end, Levie ended up with two tables: Recipes and Shows.

In the Recipes table, he lists each recipe that appears during the season and links it to the appropriate episode in the ’Show’ linked record field. The table also displays the status of the edit for that recipe, the last editor to work on it, the current length, the date last edited, and any changes that have been requested. The ‘date last edited’ field was a new addition, requested by the editors as a way to show producers when when the last set of changes had been made without their having to ask.

The ‘Changes requested’ field is also a new addition for this season, replacing a clunky, email-based workflow used in years past. “[The producer] would email the comments and that was horrible,” says Matt. “There are 5 editors on the project, so she would email me and I would have to figure out who to send the comments to from there.”

Instead, they now collect all requests for changes in the long text field, where editors can go in and comment directly in the text when specific changes have been made. “The comment field is super super important for us,” says Levie. “If you look at any of the recipes, the producer will watch the recipe and put [in] her comments, and then editors will come in and put their comments in [as well].”

In addition, “Before, the editors would forget to explain what they did and I would have to bug them — now, they go into the base to update the status to say things are done, and see the other fields needs to be updated too.”

In the Shows table, Levie maintains the overall status of each full episode for quick reference, as well as a few meta notes about the theme of the episode and its current full length. They also added “Delivery Date” and “Airdate” fields to help solidify the priority and expectations for each episode. As an added bonus, because the Recipes table connected each recipe to its show, there’s a complete list of every recipe that appears in each episode available with a single click in the ‘Table 1’ field.

Taking the Crew on the Road with Airtable

Now that Levie has developed a streamlined system for the post-production process, he’s using Airtable for other projects. Next up is a unique Secrets of a Chef event: a 90-minute special featuring Secrets of a Chef star Hubert Keller’s culinary adventures in Rio de Janeiro. “It’s a little less structured than the cooking shows, so it takes a bit longer to edit the same amount of material,” says Levie.

For this project, a simpler database will suffice, though it’s still based on the template created for the television show. Unlike the show, which has multiple episodes and benefits from setting up multiple linked tables, this special can be managed through a single table that also includes an attachment field containing the script for each vignette.

In the end, with Airtable’s help, Levie is able to spend less time worrying about the processes of post-production and more on what really matters: making culinary television look just a little more delicious.