When Sep Kamvar, director of the Social Computing group at the MIT Media Lab, approached artist Kim Holleman in 2005, he had an interesting offer: come design and develop a new kind of Montessori school that fits inside a store front. Until that point, Holleman’s artistic practice had focused on exploring “the complexities of the design in nature and the environment” as an inspiration for utopian architectures and a starting point for commentary on the increasingly toxic relationship between humans and nature. Kamvar was interested in developing a physical space for learning that emphasized the ideals of sustainability and environmentalism that pervade Holleman’s work, and she agreed to take on the challenge. While the rest of the team at the Media Lab delved into developing the core principles of Wildflower Montessori Schools and developing new software tools to enable Montessori research, Holleman got busy designing the perfect environment for exploratory learning.

The mandate of the MIT Media Lab is to engage in research and develop prototypes for further exploration of particular technologies or themes. In the case of the Social Computing group, the goal is to “create sociotechnical systems that shape our urban environments.” In practice, this means creating “micro-institutions in physical space,” designing “social processes that allow others to replicate and evolve those micro-institutions” and developing the software to streamline those processes. In the case of the school project, this meant not only creating so-called “lab schools” — the Wildflower Schools — in which to conduct research, but also ultimately figuring out a way to help others replicate their efforts in different communities.

Where many other attempts at educational reform have often taken a strongly prescriptive approach, dictating every detail of the resulting experience for students, the Wildflower schools aim to create a flexible framework that can be embraced and adapted to fit each new community it reaches. Even the name, Wildflower, was chosen to capture this spirit.

As she began building out the schools, Holleman discovered that she needed a tool to help her organize all the people and information involved in the design process. “I needed someone to make visual spreadsheets,” says Holleman. “I needed the way everyone understands spreadsheets and knows how to use them — but they needed to work with images. Unfortunately, there’s no one at my beck and call to make a program because I need one.” Then she found Airtable.

Ultimately, Holleman created a ‘school in a box’ that helped to distill the aesthetics, principles, processes and imagery that undergird each Wildflower school into a database that could be used to guide the development of an entirely new school. With each new school that opened, Holleman iterated on the template, eventually developing an easy blueprint for future expansion.

Some of the types of materials and plans Holleman keeps in Airtable.

For each new Wildflower lab school, Holleman creates a new copy of her original database. That copy becomes the foundation for each school’s team to select the themes and finishes that fit their community and needs. As they move further through the design process, the database is increasingly customized, pruning out irrelevant elements and adding new fixtures and locally sourced furniture until it is an entirely unique record of their school’s physical space.

In 2015, Holleman was invited to present an interactive Montessori-themed exhibit at El Museo del Niño in San Juan, Puerto Rico. After visiting the museum site in person, Holleman created an Airtable base in order to capture and disseminate the considerations and requirements necessary to build the exhibit, which attempted to distill many of the methods and learnings of the Wildflower schools.

Drawing on her experiences using Airtable to wrangle the details of school build outs, Holleman set out to build a new Airtable base that would help her to develop the exhibit, in collaboration with the museum director and founder, Carmen Vega, and architect Miguel Cotto, all from a distance.

...there’s no other way [besides Airtable] for somebody who’s not with me to get access to all that information.

“Because of the nature of my life and all the people that I work with, in order to function I need to trade lots of information,” says Holleman. “But it’s not data: it’s a mixture of everything from geographic places and links to videos, tons of pictures, snippets of color charts, ergonomic designs, blue prints, sketches, libraries upon libraries of special things, and there’s no other way [besides Airtable] for somebody who’s not with me to get access to all that information.”

Holleman started by creating a basic structure to capture the diverse range of items that needed to be purchased and used by the team in Puerto Rico, as well as the instructions that would help them achieve her vision.

In the ‘Project Overview’ table, she collected the different finishes and furniture items that needed to be acquired. For each element, from wall paint to the cloud-shaped hanging lamps, Holleman added one or more photos to show which color and model number should be chosen. Each item was assigned one or more owners, as well as a set of exact instructions for its use. Holleman went so far as to include links to specific colors and items: “I loaded up Airtable with building materials,” she said, “literal links to the local Home Depot in Puerto Rico, exact paint colors and such.” Using a currency field, she was also able to capture the price of each item. The summary bar at the bottom of the table automatically tallied the total price of all the items, making it easy to see at a glance how much of the total budget had already been spent.

Holleman also generated a form view from the ‘Project Overview’ to add new materials to the list quickly: 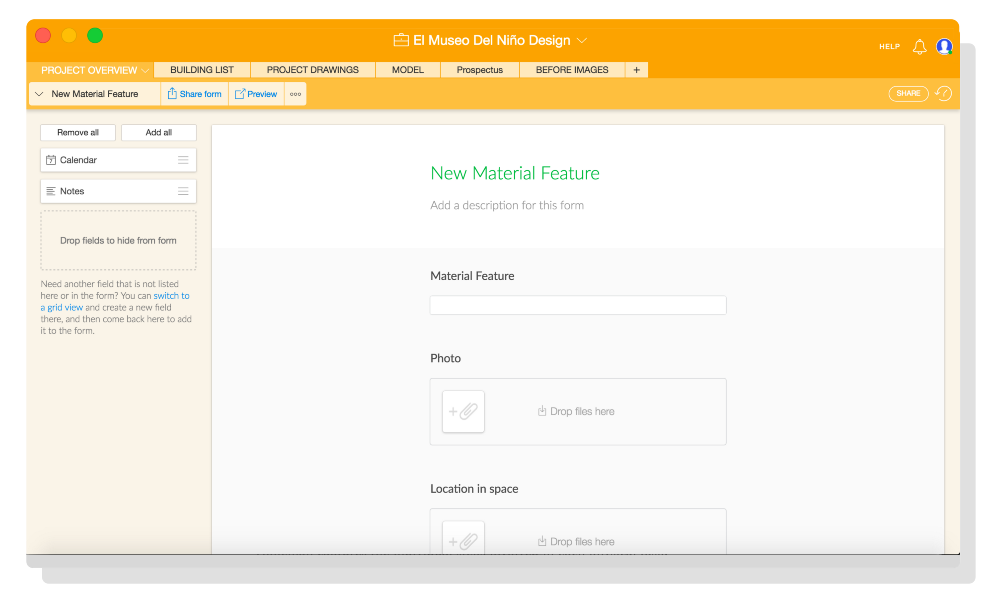 In the “BUILDING LIST” table, Holleman and team break the individual parts of the exhibit into discrete actions that need to be completed. Each task receives an assignee, as well as places to include related photos or links to materials and other items involved in the project. In the notes field, Holleman captures the individual steps involved in each physical task. 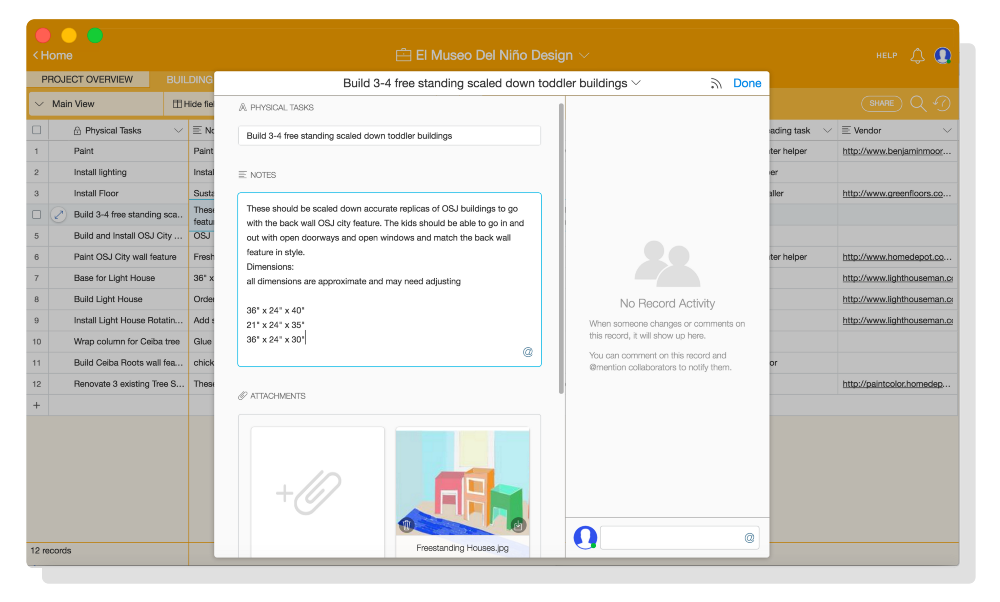 Every asset in its place

Holleman found herself with a large number of different files to manage and share with the team in Puerto Rico in addition to those in the build list and project overview. “I cannot express how many images I deal with for these projects,” said Holleman. For this project, she requested that the team in Puerto Rico provide photographs of the space in its original state to insist in the development of her plans. She also uploaded the actual prospectus for the exhibit, and then, to assist with the execution of her vision, she created a series of colorful drawings and models to illustrate how the final product should look.

With attachment fields, it’s easy to upload and share images with collaborators using Airtable, but there are a number of different ways to organize those images, whether it be by using multiple selection fields to tag them by type and then creating filtered views to quickly switch between different sets of images.

In this case, Holleman chose to create a different table for each of the asset types: “PROJECT DRAWINGS,” “MODEL,” “Prospectus,” and “BEFORE PICTURES.”

Although having a single place to collect all the lists of tasks and assets necessary for the buildout was essential for getting the exhibit off the ground, that alone wasn’t sufficient — the team in Puerto Rico still required clarification on a number of issues. “The chat feature came into play because we started to email about things that were confusing,” says Holleman. “We popped the questions over to the Airtable base and started to chat directly there, to notate the examples. Through the chat, we were able to firm it up.” 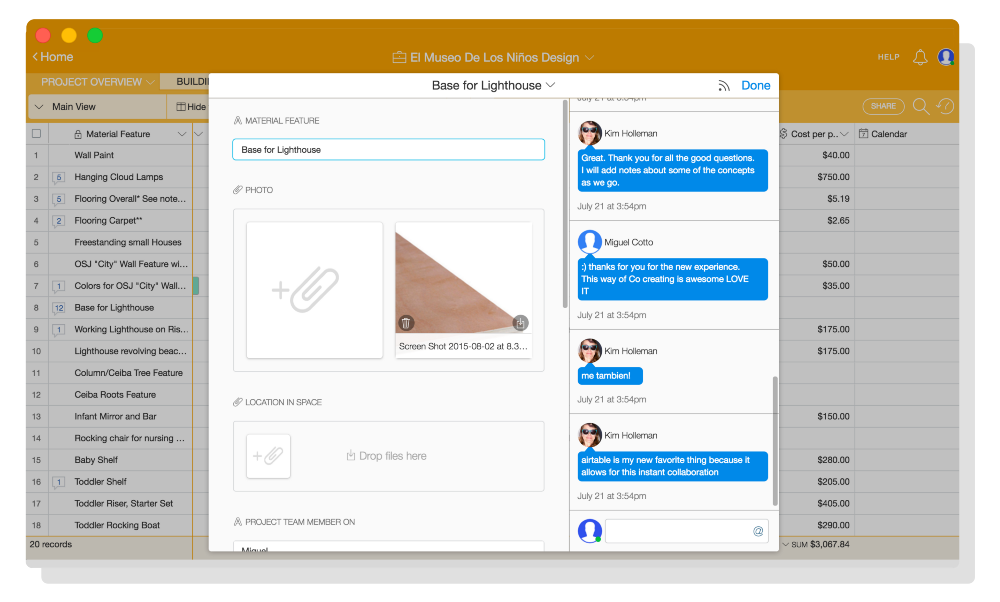 A blueprint for success

Although ultimately, the exhibit in Puerto Rico was not installed, Holleman still refers back to this base (and those she has built for the five template Wildflower schools) as she approaches future projects.

As of 2016, there are 11 Wildflower schools in operation, with the majority in Cambridge, near MIT, but others popping up in New York City and Puerto Rico. Although Holleman has released a preliminary set of design guidelines on the Wildflower Schools website so that communities anywhere can start to build their own Wildflower-like institutions, she still relies on her Airtable bases to maintain the consistency and vibrancy of her vision when helping to get new lab schools off the ground.

Learn more about Kim and the Wildflower schools over at Creators & Creatives.